The British nuclear submarine system is vulnerable despite its projected modernization 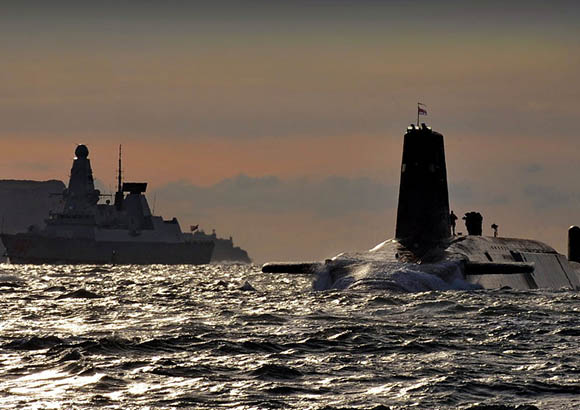 LONDON (Sputnik) – The nuclear defense system in the UK is particularly vulnerable to technological advances in the near future, he told Novosti Sputnik Andrew Futter, a professor at the University of Leicester (England).

“UK is risking everything on one card, and this worries me,” said Professor of International Politics and experts in nuclear weapons.

The author of ‘The Politics of Nuclear Weapon’, among other trials, refers to the plan of the Conservative government to continue the US Trident missile system building a new fleet of submarines before decommissioning of existing Vanguard, from the twenties.

“All nuclear states will have at least two launch systems and are the only country that depends on a system, a submarine, which creates doubt, vulnerabilities and potential risks,” he told this agency.

According to Futter, reliance on “a single system of deterrence raises many questions” about whether national security will be compromised in cyberattack or technological development of maritime drones, among other risks.

The project arose during the administration of ‘New Labour’ Tony Blair and has since 2006 with the approval of Parliament at Westminster.

Monday deputies had had a new opportunity to approve “in principle” in a vote in the Commons.

“Submission to vote is not a legal requirement, although it is a political need for the Conservative government to demonstrate that there is support and further advance the process,” said the academic.

Futter declared “marginally” in favor of the renewal of the Trident submarines because “it is the least bad plan” and at the same time, “the best insurance policy” in defense.

The academic is partly according to the Government’s position, reiterated Monday by the new Prime Minister Theresa May, that Russia has a “very real threat” to national security of the island.

“Russia remains the biggest threat facing Britain of a State and the modernization of its nuclear program has taken very series” argued Professor of Leicester.

Academic notes however that the renewal of the Russian nuclear arsenal is related “completely with the United States and, to a lesser extent, with China, but has nothing to do with the UK.”

“UK is not a protagonist and if it decided to abandon Trident is not clear what impact the general field of non-proliferation,” he said, before concluding with a “probably no”.

The renewal of the nuclear fleet, according Futon, a global issue “prestige”.

“Many see it as a symbol of great power, first class country equipped with the latest military technology, join the nuclear club is an important cultural field and a responsibility,” he told Sputnik Novosti.

Prime Minister and Interior Minister until last week had secured the victory in the vote even before opening the debate in the Commons.

But 58 of the 59 parliamentary seats in Scotland with the conservative-all but announced their decision to vote against the government motion with a sector of Northern Irish nationalists and Labour MPs, among others.

This reality led to AIAN Blackford, the SNP, to tell May: “we do not want Trident in our land,” referring to its base in Faslane, a short distance from Glasgow.

The plan that May has resumed urgently may face the impact of Brexit, according to the agency warned the nuclear weapons expert.

“If there is another referendum in Scotland and people decide to vote for independence, Trident will have to leave Faslane, will be a priority for the SNP, is likely to reach an agreement (London and Edinburgh) but it is not clear that submarines UK nuclear continue located in an independent Scotland “.